During demolition works carried out in Güstrow (Mecklenburg-Vorpommern, Germany), numerous letters were discovered. 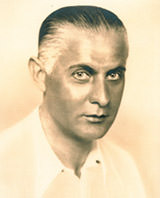 They apparently once belonged to Bernhard A. Böhmer (1892-1945), one of the dealers involved in the sale of so-called „degenerate art“ during the Nazi period in Germany. Some of the letters are from the art dealer Hildebrand Gurlitt (1895-1956) whose activities have been much discussed recently in the wake of the re-surfacing of his collection in 2013.