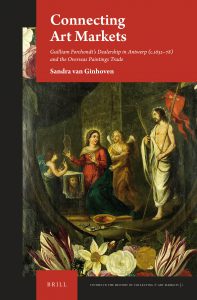 Sandra van Ginhoven’s Connecting Art Markets. Guilliam Forchondt’s Dealership in Antwerp (c.1632–78) and the Overseas Paintings Trade is an ambitious and valiant book. The result of doctoral dissertation research conducted at Duke University under the auspices of Hans J. Van Miegroet and Neil De Marchi, the study is a beautifully argued analysis of the commercial activities and strategies of pivotal Antwerp art entrepreneur Guilliam Forchondt (1608–1678) between about 1643 and 1678. It explores and explains the entrepreneurship of this chef d’enterprise in an unassuming, highly effective and pioneering manner.

In the introduction but also throughout the book (e.g. pp. 46–50), Van Ginhoven, now a Research Associate at the Getty Research Institute, shows great concern for explicating her impressive data collecting and data management strategy. She delved into archival collections in Antwerp, Cadiz, Lima, Mexico City, and Sevilla, and quarried hundreds of documents that extend from the very well-known (yet never thoroughly researched, including the amazingly rich and complex Forchondt documentation) to the intriguingly obscure. The volumes of data she gathered inspired if not necessitated Van Ginhoven to model and organize the findings in two large sets. One database, which contains records for no fewer than 915 people and 1,146 business transactions, enables thorough and new quantitative and qualitative analysis of Forchondt’s business model. The other dataset makes it possible to place Forchondt’s commercial network in the perspective of transatlantic art flows in the second half of the seventeenth century. Put differently, Van Ginhoven succeeds in developing a fresh way of enriching traditional art historical viewpoints and questions with a data-driven digital method allowing for big (or at least biggish) data analysis and visualization.

The book falls into six chapters. Chapter one demonstrates that Forchondt can be approached as a cultural agent. As a vertically integrated art dealer, he coordinated and organized every phase of the business of making, distributing and selling art within a vast regional and international network. Given Forchondt’s focus on the market for paintings in Spanish America, chapter two surveys the Southern Netherlands factor in the transatlantic paintings trade. Chapter three, which somehow can be regarded as the beating heart of Connecting Art Markets, provides the reader with a detailed account and breakdown of Forchondt’s business model. It sets the scene for the ensuing chapters. After a discussion of iconographic and stylistic features (following Kelvin Lancaster’s consumer theory, Van Ginhoven calls them characteristics) of Forchondt’s sales throughout Europe and the Americas (chapter four), Van Ginhoven zooms in on Forchondt’s commercial network with Spain and the Americas (chapter five). Finally, chapter six links archival data to extant paintings by Forchondt, his workshop or other Antwerp painters now in Spain and Latin America in order to gauge the interplay between artistic developments in both origin and destination art markets.

Van Ginhoven’s construction and discussion of the material at hand is always coherent and logical. I was particularly charmed and impressed by the effective use of different types of data visualization (mainly produced, I believe, in Tableau and R). Chart 3.3 (p. 86), which depicts the proportional sizes of paintings found in the vast Forchondt documentation, for example, paints a picture more powerful than any description in words could do. Chart 3.4 (p. 94), a histogram of rates of subcontracted paintings, and Chart 3.5. (p. 104), surveying the monthly wage expenses Forchondt paid woodworkers employed in his workshops, are equally compelling and revealing.

These, and indeed other visualizations scattered throughout Connecting Art Markets, fuel and support the new insights and propositions set forth by van Ginhoven. She rightfully highlights Forchondt’s dynamic and versatile entrepreneurial activities and strategy. The unearthed data demonstrate that his was a profitable venture- which does not mean there was sustained growth. It was driven by a flexible approach to the organization of his workshop production, diverse subcontracting arrangements with other artists, and solid business and social relationships with other merchants. The analysis shows that the Forchondt firm thrived in the 1660s and 1670s. By then, Guilliam’s sons had moved to Vienna and the Iberian Peninsula and could thus ensure easy, quick and reliable access to information that was necessary to infiltrate into emerging and booming art markets. The aggregates compiled by van Ginhoven show not only that the firm thus contributed significantly to the development of the Antwerp-Mechelen production complex, but also that the import of artworks into the Americas in particular witnessed a dramatic increase in the 1660s and 1670s. Interestingly, Van Ginhoven’s fieldwork and meticulous data analysis further reveal that the influx of Flemish paintings (especially religious scenes on copper and decorative paintings) triggered local production that heavily relied on and borrowed from the imported paintings. Forchondt, however, made sure to discriminate between markets. Van Ginhoven argues convincingly that the art entrepreneur tried to coordinate characteristics of the paintings he commissioned in Antwerp and Mechelen on what he knew and learned about the demand in the Americas and European cities. Thus, as Van Ginhoven stresses, Forchondt cum suis are cultural mediators bridging the geographical distance between visual cultures and fostering the creation and transfer of artistic innovation. And so the book is yet another forceful appeal to all art historians addressing seventeenth-century painting in Europe and the Americas. As art dealers and their agents played decisive roles in both iconographic and stylistic developments, they should be included in the matrix at all times.

Throughout, Connecting Art Markets shows that local, regional and international networks, which enabled and facilitated flows of cash, credit and information, were at the heart of Forchondt’s business strategy and are, therefore, key in understanding the dynamics shaping art markets. While they feature prominently in the discussion, the emergence, development and governance of the networks, however, is not treated as a theme. This is less a critique than a call for additional and in-depth research on the ever-changing network of networks underpinning entrepreneurial behavior. Van Ginhoven’s data-driven tactics and her cogent use of statistical and visualization software points the way. In fact, this is where the book leaves us, I believe, with an implicit call for collaboration and further research on this crucial issue: “In other words, these explorations specifically point to considering the multifaceted nature of exchanges in both the overseas art trade and the expansion of local art markets through relationships fostered by the web of art dealers, their traveling agents and their contacts in foreign markets” (p. 245). Linked data, coordination and cooperation between researchers and research groups in Europe and the United Stated will most certainly enhance the quality of the reconstruction and analysis of the dynamic networks of networks. Formal (art) historical social network analysis will also – finally – allow to assess fluctuating levels of trust, conflict and confusion generated by time-dependent ties. For networks had every potential to push but also to hamper innovation and quality.

Finally, I have a quibble with the index. Given the richness of data unearthed by Van Ginhoven, this should have been a powerful tool, allowing researchers to quickly enter the vast Forchondt universe. But it has no entry for “Brussels”, for example, while Van Ginhoven duly includes the anecdote that many colorful paintings of little artistic merit that Don Juan of Austria saw at the Brussels court were produced for Spanish buyers who had a strong preference for colors (p. 173). Likewise, the index wants us to believe that jack-of-all trades Jean Valdor (turned into “Joan” by the mischievous autocorrect (?)) makes only one appearance in the book (on page 120). Yet he is actually there on pages 105 and 121 – but then again, Valdor, dubbed “something of a charlatan” by Anthony Blunt, is a somewhat elusive art entrepreneur that trumps indexes any day.

Nitpicking aside, Sandra van Ginhoven’s Connecting Art Markets. Guilliam Forchondt’s Dealership in Antwerp (c.1632–78) and the Overseas Paintings Trade, carried out with the utmost scholarly care and creativity and vividly written, is a resounding accomplishment. It is, basically, art market studies at its best, and thus an excellent and inspiring kickoff of the new Studies in the History of Collecting & Art Markets series edited by Getty’s Christian Huemer.