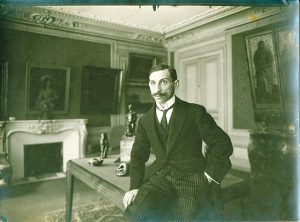 The idea for this exhibition came from reading the book 21 rue La Boétie (Grasset) by Anne Sinclair, in which the author tells the story of her grandfather, Paul Rosenberg (1881-1959), one of the great art dealers of the first half of the last century. The career of this exceptional man, a successful businessman and knowledgeable art lover, the friend and agent of Picasso, Matisse, Braque, Léger, Marie Laurencin, to name but some of the most well-known artists, serves as the guiding theme through a much wider history than his own, one in which he was both actor and victim. In other words, an exhibition on art and civilization, with the legendary gallery of Paul Rosenberg serving as the pivot to 20th century period paintings that combines the history of art, social and political history and the history of mentalities as these unfolded in France, Europe and the United States.