‘The moment was near that was to signalize the commencement of the career of one of the most successful dealers in modern art that this country has seen.’ 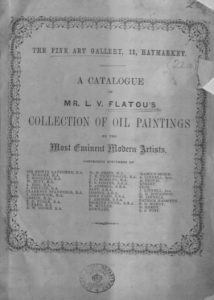 This statement was made by the artist William Powell Frith (Autobiography and Reminiscences, Vol. II, 1887) in relation to the Victorian art dealer Louis Victor Flatou. It is one of many contemporary references that venerated Flatou as a successful dealer, and key figure in the British art market during the 1850s and 1860s. However, unlike his contemporaries such as the Belgian dealer Ernst Gambart, Flatou has largely been ignored by art-historians, thus no study dedicated to Flatou exists. This dissertation offers the first attempt to understand and situate Flatou within the context of the mid-Victorian art market. It asks what kind of dealer he was, what sort of strategies he employed, and ultimately how successful was he.

There are various reasons why Flatou has been historically over-looked. The most obvious is his un-timely death. During the 1860s Flatou was at the height of his power, but died from dropsy in 1867 aged forty-seven, leaving no children to continue his name. Secondly having emigrated alone from Prussia (exact region unknown) as a teenager he lacked an education, so was largely illiterate. This would explain why we have no literature written by Flatou himself, any letters were written for him by his wife Elizabeth Anne Simmonds, as were all his cheques which he only signed. One area that lacks comprehensive records are the clients that Flatou sold to, due to the fact his inventories don’t survive.

Despite the latter, there is a wealth of primary evidence relating to Flatou and his business as a dealer. Frith dedicates a whole chapter to Flatou entitled ‘A Successful Dealer’ in the second volume of his autobiography. This chapter outlines Flatou’s emergence and rise as a dealer, and presents Frith’s perspective on Flatou. The fact that one of the most prominent and successful British artists of the period devoted a whole chapter to Flatou, emphasises his importance in the art scene. This is not an isolated occurrence, another well-known artist of the period Thomas Sidney Cooper also committed a considerable section of a chapter in his autobiography to Flatou; a pattern followed by Frith’s daughter Jane Ellen Panton.

An additional source of primary information are contemporary periodicals, particularly the Art-Journal, Athenaeum and Illustrated London News. These include exhibition reviews, fine art gossip, descriptions of auction sales, and opinions on Flatou as a dealer. Similar documentation is supplied by the general press. Flatou is not just mentioned in London based newspapers, but by press outlets throughout Britain; emphasising the expanse of his business. The British Newspaper archive allowed to form a timeline of significant events, and trace the movement of Flatou and his career.

Another area of interest are his auction records, which provide crucial information about his business. Articles in the press indicate that Flatou was buying and selling at auction houses throughout Britain during the 1850s. However, his most significant involvement at auction was at Christie’s auction house in London from 1858 until his death in 1867.

Also examining the wider developments of the art market in the nineteenth century, the dissertation is intellectually located in the growing interest concerning the professionalization of the art dealer and the rise of the commercial gallery.

Flatou emerged in the art trade during the 1850s and 1860s. This is when he establishes his taste, notable in the artists he commissioned from and bought at auction. The recollections of Frith and Cooper, too, highlight what kind of relationships he had with the artists he worked with.

Flatou’s business and marketing strategies – also in relation to his main rival Gambart – can be assessed in the tactics he employed: from his eclectic shows of cabinet-sized contemporary works, to his sensation exhibitions of a single picture. The latter is primarily examined in relation to his infamous commission of The Railway Station. Here he used publicity stunts via the press to enhance the aura and reputation of the work.

From 1858-67 Flatou spent a total of £23,170 at Christie’s. He had various habits at auction both as a buyer and consigner. Through this he could regulate cash flow, send signals to the market, and work in collusion with other dealers.

Harry Dougall: Read History of Art at The University of Edinburgh (2011-15). Came across Louis Victor Flatou while researching undergraduate dissertation and decided to make him the focus of the study. Currently undertaking the MA Curating the Art Museum at the Courtauld Institute of Art.